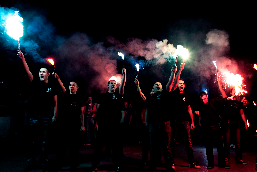 In the wake of increasing insecurity and uncertainty over the COVID-19 outbreak, some rising crime patterns have been reported. Some has been the theft of medical supplies, household goods and food; but some of it has been more insidious – violence against police, hospital facilities, healthcare professionals, and hate crimes and xenophobic attacks in general. Much of this crime relates to the sense of uncertainty and a lack of order that the situation has provoked. In this environment, far-right groups across the world have seen an opportunity to publicise themselves and make new ground.

An increase in far-right activity has been reported in Europe, where right-wing parties with an anti-immigrant, Eurosceptic, nationalist disposition have found common cause in calling for greater border security, declaring how migrants are natural carriers of the virus, and seeking to restrict the entrance of refugees (against the advice of global medical associations, such as the WHO, which suggests that this would have little impact in slowing the spread of the virus). In Italy, parties like La Lega and Brothers of Italy have been downplaying the impact of the virus, inviting tourists to continue to visit, while denouncing the arrival of African migrants on the grounds that Africa now hosts the virus. In Hungary, Viktor Orbán’s government, dominated by his Fidesz party, has proposed an emergency bill giving him the power to rule by decree indefinitely, almost as a Putin-style autocrat (this is still being debated in parliament, but is expected to be adopted). At a more local level, far-right activity is being widely seen in the United States, where the white supremacist community has increased its recruitment activity and has openly discussed the “obligation” that it has to spread the virus amongst law-enforcement personnel and non-white communities.

Conspiracy theories flourish in this environment. With so little understood at the moment, some groups want to lay claim to the first explanations for the outbreak, and it suits their cause to peddle ideas about a Chinese government plot or Democrat Party subterfuge. But of greater relevance is that these theorists are now stuck indoors with even less access to the real world than usual, and more exposure to the websites that propound the sort of output with which they want to engage. In this environment, people are given simplistic explanations for issues that they don’t understand, and (more importantly) are offered something tangible to fight and blame for the current crisis. This merely perpetuates the far-right agenda.

Perhaps of greatest importance is the lack of political leadership by those who should be providing the best example. The leaders of the extremist parties in Europe are doing little more than perpetuating their rhetoric for the sake of attention, in the hope of picking up some votes. The behaviour of President Trump has been remarkably unhelpful: his long-running denial of the situation, his insistence that it is all “under control”, and his subsequent references to the “Chinese virus” have done little more than perpetuate conspiracy theories and xenophobia amongst his electoral base. Whether this is a deliberate attempt to galvanise his supporters in the run-up to the presidential election, or simply a lack of coherent policy and leadership has little bearing on the outcome of increased far-right sentiment.

The activities of far-right groups are not always easy to predict, and will depend on whether their attempts to recruit new members gain any traction; but it is reasonable to expect an increase in racially-motivated hate crimes across Western nations, particularly sinophobic violence, prompted by far-right propaganda. The British National Socialist Movement has taken a more disingenuous route, weaponising the virus and advising sufferers from COVID-19 to spend time in a local mosque, synagogue, or “diverse neighbourhood”, declaring that this will actually help cure the disease. It is possible that there may be effectively bioterrorist attacks against certain religious communities in the medium- to long-term.

Ultimately, if insecurity and uncertainty are prolonged, it is possible that some groups will take responsibility for community services with their own “civil defence” militia: as more pressure is put on the police, then far-right groups may seek to impose their own form of local policing. A version of this is already happening in Brazil, where gangs have themselves been imposing curfews within favelas. In reality, a state of insecurity will suit extremist groups well, as it will give them a certain legitimacy and add momentum to their recruitment efforts: in reality, any restoration of law and order would be of little value to them. Civil support groups are more likely in the United States, where firearms are easily procured, but still not impossible in those parts of Europe facing societal breakdown over a longer period. This would be the political opportunity that the far-right has been seeking, and would allow them to demonstrate the failure of society, and the solutions that they can provide.

When the pandemic is over, the far-right are likely to have more (political) ammunition to make a case for their own utility, or for the failure of the social democratic, liberal order, and it is very possible that they will have conducted fruitful recruitment campaigns. 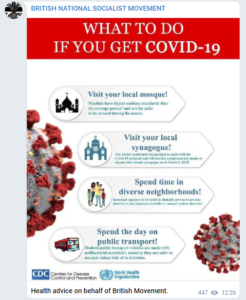