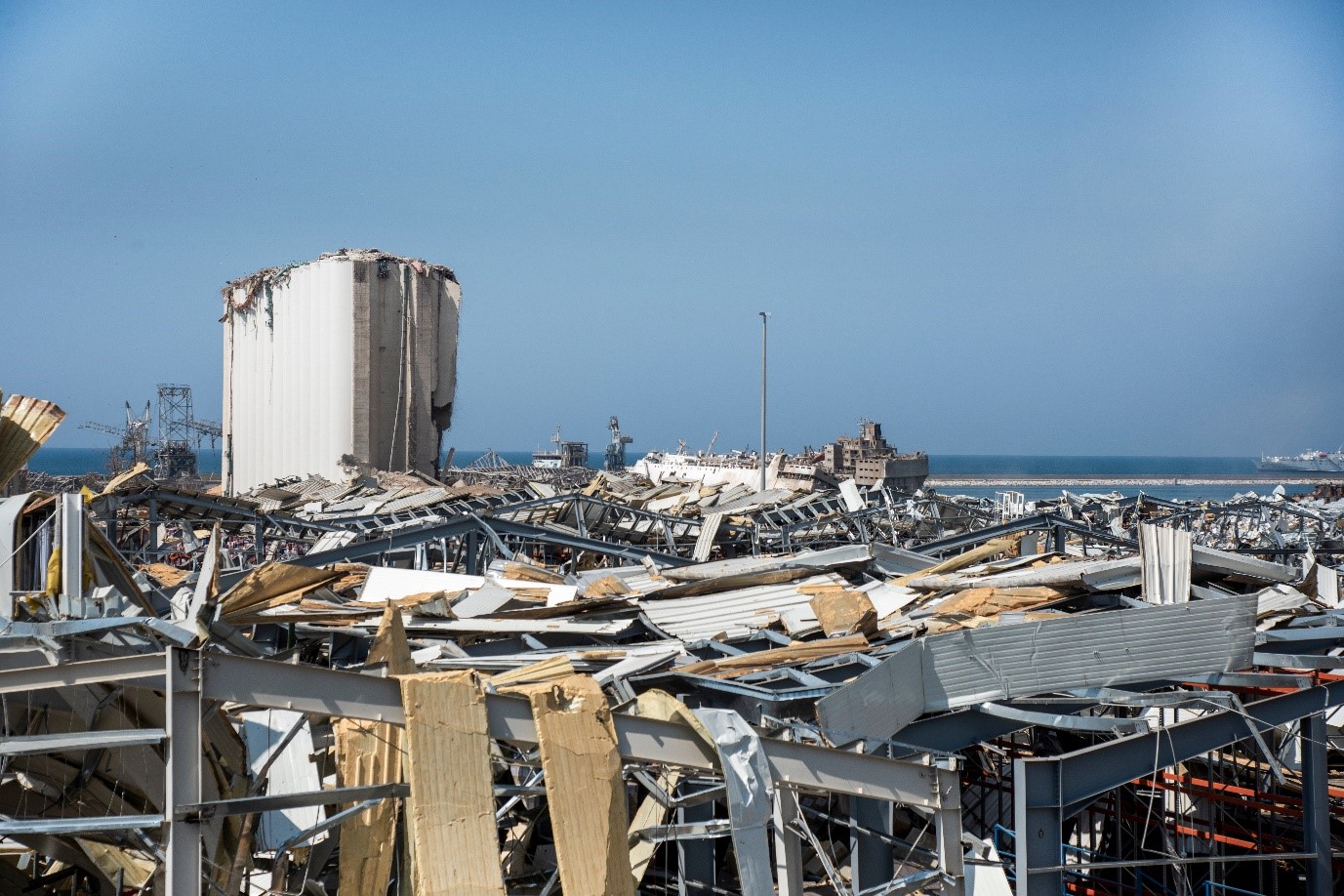 The explosion in the Port of Beirut on 04 August has caused citywide damage, rendered the port non-operational, killed over 135 people, and has left thousands homeless and injured. Prior to this, Lebanon was dealing simultaneously with severe economic, political and health crises. The incident is set to have significant repercussions for the country, and is in danger of undermining its future as a functioning independent state.

Lebanon has been suffering an economic crisis since October 2019, when the reality of a failing financial system and corrupt governance sent capital fleeing from the country. Decades of economic mismanagement by corrupt politicians has resulted in massive external debts, burdening the economy with the third-highest debt-to-GDP ratio globally. With the economy no longer able to artificially sustain itself, the full force of the crisis is being felt by the Lebanese people. Nearly 50% of the population now live under the poverty line, as unemployment has topped 30% and hyperinflation has made basic goods unaffordable.

Squabbling politicians have been blamed by the Lebanese for the economic crisis and the failure to agree to a solution. Lebanon has been governed by sectarian politics since the end of its civil war in 1990. This has fostered nepotism and pervasive corruption that have hampered development and economic reform. The inability to solve the economic crisis has resulted in continuous anti-government civil unrest since October, leading to the resignation of the former prime minister in  the same month and the current political stalemate.

The paralysis of the state over the past months has crippled national infrastructure and compounded the COVID-19 health crisis. Unemployment has meant more Lebanese are unable to afford private healthcare facilities, increasing the burden on the national health infrastructure. Alongside this, rolling blackouts, a lack of medication and shortages of PPE have left the country ill-prepared to cope with the pandemic.

The destruction caused by the explosion is set to bring immediate problems to Lebanon. Three of Beirut’s hospitals are now non-operational, and many more have been damaged. With heightened demand on the remaining hospitals from the explosion, on top of COVID-19 patients, it is likely that health services in the capital will be unable to cope. The port, which provides Beirut and Lebanon with the majority of its food, is also out of action. Damage to the area surrounding the port has left an estimated 250,000 people without homes. A food crisis, alongside homelessness, will likely lead to an increase in crime, unless the government intervenes to provide emergency resources. However, with a historically corrupt government, and without the financial resources to solve these issues, heightened anti-government civil unrest in the medium term is also expected.

The most significantly damaged area of Beirut is the city’s port. For centuries, the port has served as a regional hub, with strategic links to markets in Asia, Africa and Europe. This has previously brought business and wealth to Beirut. However, as a net importer, Lebanon is dependent on the port for its survival; 60% of all the country’s imports pass through it, including a significant proportion of the country’s non-domestic food. Additionally, the port held the country’s national grain silo. While officials downplay the significance of the destruction of the grain silo, 15,000 tonnes of the country’s grain supply are now unusable, which will only worsen food insecurity. With the major food importing terminal out of action for the foreseeable future, and a humanitarian crisis in the city, hyperinflation is likely to increase.

Lebanese authorities have quickly offered Tripoli and other national ports as substitutes to Beirut. However, these replacements are currently unable to handle the equivalent capacity as Beirut. Without adequate infrastructure improvements, or a complete rebuild of the Port of Beirut, Lebanon risks losing its link to the global economy.

Inevitably, a conclusion as to where the responsibility lies for this disaster will be politicised. While the emerging facts point to the explosion being an accident, blaming negligent port authorities is likely to only be a temporary solution. Negligent officials most probably will expose corrupt governance and years of ignored warnings. Any possibility that the government, already stalled by sectarian fissures, could unite over this cause, seems very unlikely, only further undermining  political stability.

As can occur in the wake of a national incident, there is the danger of the disaster being exploited. Sectarian divisions within the government may use the disaster for political gain, as has been a tradition in Lebanese politics, and was the cause of the country’s civil war. Lebanese political parties, which find their support base in specific religious groups, such as Hezbollah, a Shia militia with significant political influence, may attempt to further their own agenda by turning the disaster and its consequences into a religious confrontation.

The incident is also a risk to regional stability. The possibility of the explosion being linked to foreign interference to disturb the centre of Lebanon cannot be ruled out. A history of tension between Lebanon and Israel may be worsened if anti-Israeli rhetoric is fed into the narrative of the explosion. Although blaming an external power may temporarily remove the spotlight from domestic issues, a war with a foreign power would only cripple Lebanon further.

While currently on its knees economically, Lebanon is vulnerable to external political influence through the power of foreign aid and political leverage. Lebanon plays a prominent role in the anti-Israel axis in the Middle East, so for anti-Israel powers Iran and Syria, this will be an opportunity to shore up Lebanon’s support by guaranteeing continued Shia political influence. However, the immediate political vacuum may also give rise to the opportunity for former colonial power, France, to increase diplomatic influence over the country. President Macron was the first foreign leader to visit Lebanon after the incident and made the need for political reform clear. Potential French and western involvement will run counter to the stated aims of the anti-Israel agenda, potentially providing a future flash-point in the Middle East.

If the Lebanese population become suspicious of the activities of foreign governments, it is likely to only worsen their cynicism  of their own government, provoke unrest and long term instability.

The ability to rebuild

The position of Lebanon prior to the explosion on 04 August complicates the country’s ability to rebuild itself from this disaster. The current economic crisis means that funds to repair the city are not available domestically. With the government unable to provide essentials such as fuel for the national power grid, it is a serious concern that neither the government, nor the economy will cope with this disaster.

A rebuild will rely almost entirely on foreign aid. However, this is likely to be tied to demands for influence and domestic reforms. From the West, aid is likely to come attached to demands to solve the current political deadlock and minimise future corruption. Whereas from regional powers friendly with Lebanese Shia groups, such as Syria and Iran, aid at the price of influence is likely to be a more enticing proposition for self-serving Lebanese politicians. With corruption endemic, there is real danger that any potential aid will not find its way to its intended destination.

With Lebanon growing more and more unattractive as a place to live, the damage to the capital may be the final straw that leads to a mass exodus from the country. With a contracting population comes a ‘brain drain’, which may lead to the further economic damage. If a generation of Lebanese are forced to leave their country, the hopes of economic recovery and political reform are minimal, and will further push the country along a path to becoming a failed state.

The possibility of cooperation

Since October 2019, anti-government protests have increasingly demonstrated cooperation between different religious sects. Groups have united over their shared suffering at the hands of the government. The indiscriminate nature of the explosion may provide further grounds for cooperation between groups, potentially also in government. The shock of the incident could finally be a catalyst to produce cohesive government policy and perhaps resolve the numerous crises that engulf the state. While this remains the most positive outlook, it currently does not seem the most likely.

If any assistance in the area is required, NGS have capability in Beirut for on the ground support. Please contact our operations team for any enquiries regarding facilitation of operational support in Beirut.