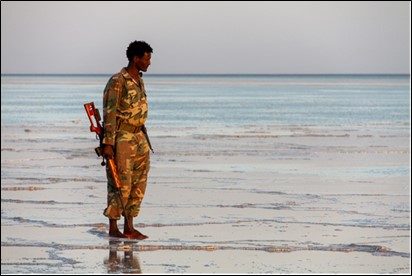 With climate change having an increasing impact on global politics, NGS considers its implications for the present and future global security environment.

Climate effects and incidence of conflict have been linked in literature for centuries, starting with Hippocrates’ assertions on the ‘warlike temperaments’ of men at different latitudes, and followed by climatic determinist theories which argued that the character of certain races was dependent on the climate in which they evolved. Though both theories have been largely proven to be incorrect, contemporary examples indicate that climate-conflict nexus is contemporarily observable, particularly in sub-Saharan Africa. Many investigations have observed a link between climate effects and conflict incidence, namely through agriculture systems which, disrupted by climate events, create sufficient discontent in poorly governed agrarian economies for violence to occur. Indeed, it is possible that the increasing scale of climate events could take this link beyond agrarian economies and to larger states. Climate events and effects therefore are expected to have an increasing impact on the dynamics of the modern security environment for states, businesses, and individuals.

Sub-Saharan Africa plays host to the three factors which make climate-related violence more likely: agrarian economies, poor governance, and growing, dense populations. Long-term instability in the Lake Chad Basin clearly demonstrates these factors coalescing to link climate and conflict. Straddling Nigeria, Chad, Niger, and Cameroon, the Lake Chad Basin is relied on directly by 30 million people and has shrunk by 90% since 1973, leading to significant shortages of water for drinking and irrigation, which in turn has caused the spread of disease and malnutrition in the area. The resultant desperation of inhabitants of the area has caused them to turn to clandestine groups such as Boko Haram for economic support, pledging their allegiance to radical Islamic values and practices in return for food, water, and the promise of regular pay. Boko Haram can be seen to have weaponised failing agriculture systems to depict secular governance as a failure unsuitable for the governance of these regions. Lying at the edge of the administrative control of each of the four states, there is little authority presence in the Lake Chad region, resulting in armed groups creating their own governance structures and power bases.

Similarly in Somalia, ascension of violent groups has been linked to crashing cattle prices as a result of drought, which makes animals costly to feed and water. This leads to mass selling, market saturation, and consequent devaluation of livestock. Combined with poor bureaucratic infrastructure and governance, climate impacts create desperation in Somalis which can cause them to join clandestine groups and seek alternative sources of income. The first is al-Shabab, a clan-based Islamic fundamentalist group which has enjoyed a recruitment boom since the famine of 2006 in Somalia through its exploitation of insecurity, promising regular food and salary payments to those willing to join, similarly to Boko Haram. Indeed, Somalia is once more on the brink of famine, which has driven a prevalence in violence between groups. In more coastal regions of Somalia, climate shocks such as drought see individuals turning to piracy, driven through climate condition-related desperation by the prospect of large ransoms potentially collected from large ships commandeered in the Indian Ocean.

It is important to note that in both the cases of the Lake Chad Basin and Somalia, climate shocks serve as a catalyst for violence and clandestine activity, and likely do not directly cause violence by themselves. Both regions have historically experienced local and tribal conflict, as well as being governed by under-resourced state institutions which are not adequately structured for governance of outer regions of their states. Economic development in both areas has centred around agriculture, which obviously relies on stable weather patterns and conditions, meaning that enormous portions of these economies are directly vulnerable to climate conditions. Reliance on favourable conditions for agricultural production in states where clandestine groups exist can therefore easily lead to growth of these groups and violence between NSAs and state authorities.

Though the three factors which drive climate-related conflict (poor governance, existing tensions, and reliance on agriculture for economic health) are predominant in Africa, variants of these exist also in the Middle East. Poor governance and existing tensions between tribal groups indeed are common in the region. Though Middle Eastern and North African economies are resource (mainly oil)- based, poor governance in the past has meant that reliance on foreign imports of grain and other agriculture products has led to shortages and resultant violence during supply difficulties.

The Arab Spring, which saw a wave of revolution sweep across the Middle East, has been linked to high prices of basic goods and a lack of good governance in response to food shortages, epitomised by riots in Egypt over high bread prices in the build-up, and a consequent shift in policy favouring Egyptian-farmed wheat following it. Similar to the cases of the Lake Chad Basin and Somalia, poor governance and limited agriculture systems has led to violence. Future shortages in agricultural supply in such regions (which could potentially come in the form of climate shocks) could very easily upset the fine balance of power in some states and lead to civil conflict.

The Russia-Ukraine conflict therefore also raises the issue of global reliance on agriculture, showing many to be reliant on international food exports from certain regions, in this case, Russia and Ukraine. Whilst the war has shown this, reliance could also be stretched by larger-scale climate shocks such as widespread droughts and flooding and the impact these could have on agricultural output. Whilst it is doubtful that a climate shock with effects comparable to that of the Russia-Ukraine conflict shall happen soon, existing phenomena such as the instability observed in Lake Chad coupled with the increasing frequency and intensity of climate shocks globally highlight the need to consider possible climate effects and their consequent potential impacts on the broader security environment.

The Rest of the World

Though Africa and the Middle East are most vulnerable to climate-induced economic shocks which could cause violence, the rest of the globe is not immune to such events.

The Russia-Ukraine conflict has had a significant effect on food prices globally, including in well-developed and stable economies in Europe, showing how even larger economies are affected by agricultural shortages. However, such states have sufficient institutional capacity and political stability needed to avoid conflict, as well as producing some of their own produce. Such regions are normally temperate and so experience fewer dramatic climate events and changes. However, questions over poor economic governance have the potential to cause protests and changes in government which can be potentially disruptive for businesses. Climate events through agricultural channels are unlikely to affect enormously the security environments of Europe and North America in terms of violence incidence, however they do have the potential to cause market imbalances and economic shocks in the future, particularly with climate effects becoming more pronounced in exporting countries overseas.

Studies conducted across a number of years seeking to analyse the conflict-climate relationship have found significant results indicating that with higher temperatures and lower precipitation, violence becomes more likely. As global populations rise, there is potential for such a link to be more pronounced due to increased scarcity of global resources. Emphasis of the climate-conflict phenomenon is primarily centred around sub-Saharan Africa, where the most notable examples of it occur, with the UN in 2017 specifically citing alleviation of climate impact as a way of helping prevent conflict in the Lake Chad region; however, links can be observed also in the Middle East. Other resolutions have been adopted which have written climate factors into the security considerations of the UN and other bodies, assimilating it increasingly into the security discourses of media outlets and governments as a future potential source of political violence.

The examples given above illustrate clearly how climate effects operate to create conflict. However, these are not the only instances where this can be seen or will be observed. Bangladesh, for instance, faces significant challenges, with its serial exposure to extreme weather events and rising sea levels predicted to displace one-seventh of the population by 2050. With an already rising population, Bangladesh faces the prospect of further overcrowding and resource scarcity. Here, again, climate effects will exacerbate sources of conflict, which is likely to lead to violence due to existing ethnic tensions, or at the very least, political overhaul. This is one of many future examples which can be anticipated.

Securitisation of climate effects in security discourses should therefore translate into business considerations when assessing expansion into certain geographical areas and professional sectors, as future climate impacts could massively affect the productivity of certain industries. Climate effects pose a very real and immediate threat to business efficacy and political stability, and should be increasingly accounted for in medium and long term assessments.