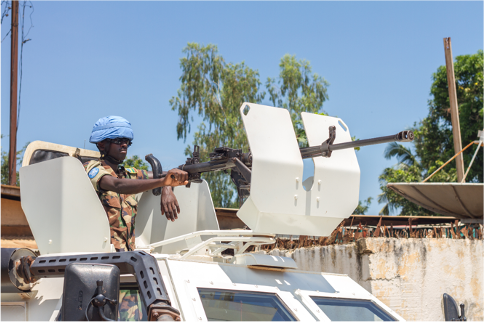 Renewed Violence at a Glance

Following twelve months of tentative peace, widespread violence has returned to the Central African Republic (CAR). It began in December last year, as a new rebel coalition, the Coalition of Patriots for Change (CPC), allied with former president Francois Bozize, began launching attacks on government positions in the west. The government, led by incumbent Faustin-Archange Touadéra, is being supported by UN peacekeepers, Russian mercenaries and Rwandan troops. The fighting is concentrated along a key supply highway running from the capital Bangui in the south to the town of Garoua Boulai on the Cameroon-CAR border, but has spread across the country. Conflict is likely to worsen over the coming months, as the CPC and Bozize aim to pressure the government into a power-sharing agreement.

The CAR’s population of 4.9 million was deeply vulnerable prior to December’s surge of violence, following years of internal conflict and a Human Development Index that is the second worst in the world. Before this bout of conflict began, 2.8 million CAR civilians were in need of humanitarian assistance, and 1.8 million had been targeted for assistance by the UN. 1.9 million people are food insecure, and this is projected to increase to 2.3 million by May 2021.

The main impact of the violence has been to force civilians from their homes, either into isolated forested areas or makeshift humanitarian zones. 682,000 people were already displaced prior to December, and this figure has increased by 240,000 over the last two and a half months. The most heavily affected areas are Mboumo, Ouaka and Haute-Kotto prefectures in the east, and Bangui, Ouham and Ombella M’Poko prefectures in the west. The coming together of previously fractured rebel groups is responsible for such widespread displacement, as the CPC now has a nationwide presence. The movement of IDPs into safe zones also aids in the spread of COVID-19 and although the CAR officially has 4,995 cases, the true number is likely to be higher, with IDP communities facing elevated risk of infection.

Since 80% of CAR’s imports arrive via the main highway with Cameroon, food supplies and aid deliveries have been significantly curtailed. Food prices have tripled in Bangui, and over 1000 humanitarian trucks are stuck at the border with Cameroon. CAR’s population is widely aid dependent, so current patterns of violence are threatening to cause large-scale deaths from hunger and malnutrition. Aid delivery has been made significantly more difficult by frequent attacks on humanitarian workers, with 66 incidents recorded last month, the highest ever figure.

The short- and medium-term humanitarian situation is likely to worsen, as rebel activity increases against government and civilian populations. The worst-case scenario is a resumption of widespread ethnic violence, which occurred most drastically in 2014, and which could occur following splits in the CPC. The long-term picture is also dire, as any political settlement is likely to see violence evolve rather than stop, as rebel groups jockey for positions in a new government.

Travellers to the Central African Republic are advised to reconsider any travel outside of central Bangui, in particular to western towns and to central regions around Bambari. No travel in the country should be conducted without detailed route, security and evacuation planning, and without appropriate security protection. Travellers to the area should contact Northcott Global Solutions, who can provide risk assessments, tracking, security escorts, personal protective equipment and emergency evacuation.