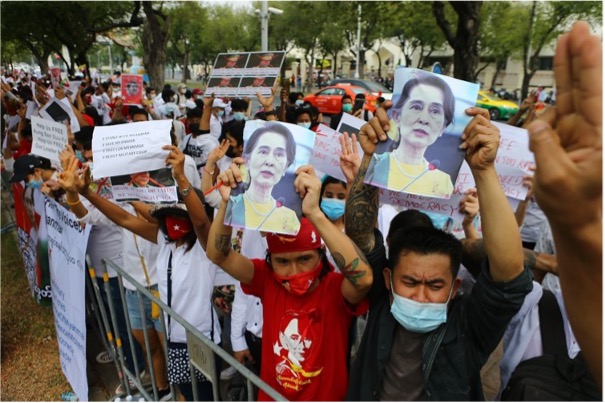 Since the military coup, hundreds of refugees have moved towards the Indian and Thai borders, fleeing persecution and political instability. Almost a thousand people have used people-smuggling networks to travel from Myanmar’s north-western Chin state into India’s Mizoram state. Hundreds more are currently sheltering in remote areas along the Thai border, reportedly under the protection of ethnic militias in the area, who are engaged in long-term struggles against the Myanma government.

Myanmar has been embroiled in instability since 01 February, when the military rejected the National League for Democracy’s landslide election victory and seized control of the country, detaining its leader Aung San Suu Kyi and other high-level officials. Widespread demonstrations and national strikes in opposition to the coup followed, and over 400 protestors have been killed as authorities responded with lethal force. Instability at a national level has been matched by international condemnation of the new military regime; the United States has imposed sanctions on top military officials, and regional states have issued calls for a return to democracy and a respect for the rule of law.

Myanmar’s military has already faced significant international pressure since 2017 over its persecution of the Rohingya minority. Almost a million Rohingya fled indiscriminate violence in Rakhine state into neighbouring Bangladesh, and prior to the February coup Myanmar was already the world’s fifth-largest exporter of refugees.

The current political crisis threatens to create a new wave of refugees.

Almost a thousand people have already crossed the border into India’s Mizoram state, and the numbers making the journey have doubled over the last week. The most common destination is the district of Siaha, but refugees have been crossing along all of Mizoram’s 510km border with Myanmar. Refugees are being aided by networks of Indian volunteers, who have been providing transport and accommodation. Strong ethnic and tribal links exist between the Chin ethnic group of western Myanmar and the Mizo people of Mizoram: inter-marriage is common, and refugee movements have historically occurred in both directions as a result of war and famine, most recently in 2007. The Mizoram state government has asked Indian federal authorities to grant asylum to those arriving from Myanmar, but this has been rejected, and the central government has ordered four states (Mizoram, Nagaland, Manipur and Arunachal Pradesh) to stem the flow of arrivals. Ordinarily there is a Free Movement Regime allowing regular passage across the border for those who live 16km either side, but it was suspended in March 2020 due to the coronavirus.

Refugee movements have also been reported along the border with Thailand. Hundreds of Myanma, predominantly policemen and activists, are currently residing under the protection of different ethnic militias and rebel groups in Kayin and Shan states. The largest of these groups, the Karen Nation Union (KNU), has said that it expects up to 7,000 refugees to arrive by the end of April, despite a military offensive against the KNU this month that has been described as the deadliest in a decade. In anticipation of large refugee arrivals, Thai authorities are constructing a 43,000-capacity camp at Mae Sot and have set up asylum-processing centres in Ranong and Chumphon. Border patrols have been increased in the area, however, and Prime Minister Prayut Chan-o-Cha has ordered the military to prevent refugee flows for fear that Myanmar’s high coronavirus infection rate could lead to outbreaks in Thailand. Human Rights Watch has also criticised the Thai government for expelling asylum seekers at the border without any asylum processing.

There are no signs that political violence is going to decline in Myanmar over the short or medium term; demonstrations are occurring with increasing regularity and demonstrators are being killed in increasing numbers. It is unlikely that pressure from the international community will have a decisive effect in reducing violence, and the military is yet to face concrete measures from its key political allies in New Delhi and Beijing. Refugee flows into India and Thailand are therefore highly likely to increase in volume, particularly if Myanma authorities escalate their political repression.

In India, this could potentially lead to significant restrictions on cross-border trade and movement. In this scenario, the reticence of the Mizoram state government to block refugee arrivals could lead to the further federal deployment of military and police units, destabilising the Indian side of the border and causing a build-up of refugees on the Myanmar side. The Mizo National Front, which controls the Mizoram state government, has a history of military confrontation with the Indian government, and attempts by Indian authorities to coerce local groups could cause civil unrest.

In Thailand, the presence of political refugees could further escalate fighting between the KNU and the Myanma military. On 28 March, Myanma airstrikes against KNU positions in northern Kayin state, the first to be conducted in years, caused a reported 3,000 people to cross the Thai border. Continued military action against the KNU is likely to result in large refugee flows towards the Thai border, of both existing refugees who have already migrated to Kayin province, and of local members of the Karen ethnic group. Although Thailand has been conducting preparations for a scenario of this nature, its concerns over the coronavirus and existing patterns of returning refugees back to Myanmar could cause the imposition of border restrictions. This would have a damaging impact on trade and movement throughout the region.

Travellers should reconsider all travel to Myanmar. For those who do travel, a fully resourced evacuation plan (one taking into account the triggers necessary for either hibernation or extraction) should be considered, and contingencies should be created in the event of border closures with India and Thailand. Northcott Global Solutions can provide risk assessments, tracking, security escorts, personal protective equipment, remote medical assistance and emergency evacuation.