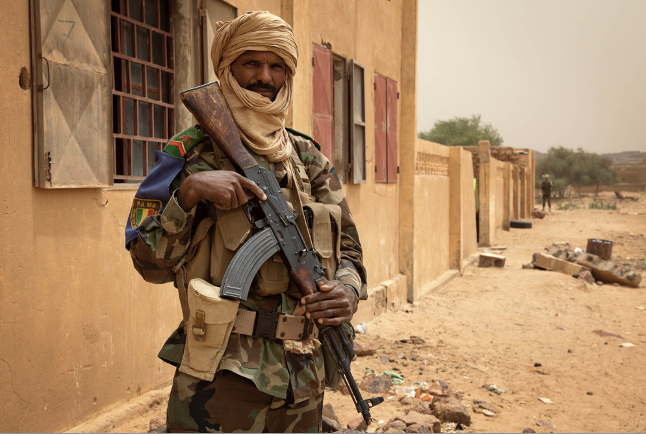 According to the Armed Conflict Location & Event Data Project (ACLED), 2020 was the deadliest year in the Malian conflict so far, with 2,825 civilian and combatant deaths. This high death toll was driven by the growth of the rival jihadist groups Jama’at Nusrat al-Islam wal-Muslimin (JNIM) and the Islamic State in the Greater Sahara (ISGS), as well as the continued militarisation of ethnic groups, especially the powerful Dogon-majority militia Dana Ambassagou. Mali’s fragmented security environment is caused by a lack of effective state authority across large swathes of its central and northern areas. The central government is not only absent to a large extent, but remains focused primarily on security, with the abuse and predation at the hands of security forces a common occurrence. Violence was subsequently concentrated last year in the regions of Mopti, Tombouctou, Gao, Sikasso, Segou and Ménaka.

Over the last four weeks, the number of conflict events (violence between armed combatants, violence against civilians and the use of remote explosives) has been 10% higher than the monthly average over the last 12 months. Evidence from 2021 so far suggests that the level of violence in Mali is unlikely to meaningfully fall before 2022, and a coup in May this year has introduced fresh unpredictability into the country’s political landscape. That landscape is being shaped by internal turmoil within the Malian government, an increasingly troubled relationship between authorities and the country’s armed groups, and external links connecting Mali with both regional institutions and France, who have 5,100 troops currently conducting military operations against Islamists in Mali and across the broader Sahel.

Mali experienced its second coup d’état in nine months on 24 May, when military officers arrested the transition president, Bah N’Daw and the transition prime minister, Moctar Ouane. The coup was orchestrated by Colonel Assimi Goïta, the same officer whose removal of President Ibrahim Boubacar Keïta in August 2020 led to the transitional government of N’Daw and Ouane, in which he also claimed the position of vice president.

The removal of Mali’s nascent transitional regime stemmed from internal conflict between the transitional government’s civilian and military elements. The former, represented n N’Daw and Ouane, wanted to curtail the power of the latter and did so by excluding two colonels close to Goïta from the second transitional government, announced on 24 May. The swiftness of the coup, which came just hours later, demonstrated that the Malian military has remained in control since August last year, despite the appearance of a civilian-led transition.

This latest manifestation of military rule is likely to have a series of effects on the Malian conflict. Firstly, relationships between the new government and the Co-ordination of Azawad Movements (CMA), a Tuareg coalition formed by groups who led the 2012 rebellion that sparked the current conflict, have already begun to worsen. The CMA has demanded a commitment from the government to continue abiding by the 2015 Algiers Agreement on Peace and Reconciliation, as the new transitional prime minister, Choguel Kakalla Maïga, has stated in the past that he believes the agreement to be the “partition of Mali”. The agreement calls for political objectives long sought after by northern Tuareg groups, such as decentralisation and the creation of a new integrated national army, and any concrete deviations from Maïga or Goïta in its implementation could lead to violence with Tuareg groups. This risk has been exacerbated by Goïta’s removal of the two CMA-affiliated members in the transitional cabinet.

Crucially, if Goïta pushes Tuareg groups too far, there is a possibility of greater collaboration between them and the Islamist elements, who are responsible for most of the country’s violence. Armed Tuareg groups have a long history of working alongside jihadist elements in Mali, and Al-Qaeda has had a presence in the country since 1998. This scenario would almost certainly result in higher levels of violence, both between combatants and against civilians, across northern and central regions.

The two significant regional developments in 2021 have been the political transition in Chad following the death of Idriss Déby on 20 April, and the regional fallout of the 24 May coup.

In the case of the former, the 1,200 Chadian troops Déby committed to the G5 Sahel force in Mali, Burkina Faso and Niger before his death remain conducting counterterrorism operations in the region, although this could possibly change. The political situation in Chad remains unpredictable and its new leader, Mahamat Déby Itno, could still potentially call on the 1,200 soldiers allocated for operations in the Sahel in order to quell domestic unrest.

Following the August 2020 coup, Mali was suspended from the Economic Community of West African States (ECOWAS). Unlike last year, however, no economic sanctions have been placed on the country as of yet, and Goodluck Jonathan, the ECOWAS Special Envoy to Mali, has refrained from directly criticising Goïta’s decision to directly inherit the transitional presidency. Economic sanctions, as well as the possible closing of the UEMOA Central Bank (West African Economic and Monetary Union), are still likely to occur if Goïta attempts to hold onto power beyond the presidential and general elections planned for February 2022. The economic damage that would result from these measures would be highly likely to lead to protests and civil unrest, with the National Union of Malian Workers holding a nationwide general strike as recently as the 24-28 May.

The most significant rupture in external relations following the coup has been those with France. President Macron rapidly condemned the move and announced a suspension of join French-Malian military operations, declaring on 06 June that the number of French troops in the Sahel would be drawn down, although no details were given about the scale or timeframe of the withdrawal.

The withdrawal of French troops from Mali poses a significant risk to Malian authorities’ efforts to counter JNIM and ISGS, and would be likely to embolden jihadist activity in the country. The new integrated Malian army envisaged by the 2015 peace agreement is currently only 1,735 soldiers strong, and is riven by internal political disputes between different armed groups and the government over the allocation of troop quotas. In combination with the fresh ambiguity over the Chadian contingent in the G5 Sahel force, the rupturing of relations with France has put the long-term campaign against Islamist militancy in the country in serious doubt.

The risks of civil unrest and political violence are likely to remain extremely high in Mali over the short and medium terms. Mopti, Tomboctou and Gao are likely to continue as the epicentres of the conflict against the jihadist threat, but the new uncertainty in the relationships between the CMA and the Malian state could possibly lead to the resumption of conflict further north as well. The withdrawal of French troops, when it occurs, can be expected to further worsen the capacity of national and regional forces to control the security environment. A tight election schedule in 2021 and 2022 will act as another risk factor, as election campaigns in conflict-affected areas were one of the causes behind the high number of fatalities in 2020. Finally, the economic context for ordinary Malians remains precarious, and protest events are likely if economic sanctions are placed on the country by ECOWAS – any demonstrations will fuel the anti-government sentiment relied upon by militants.